A wonderful gathering at Nomad’s End put me in the mind of this poem from Four Blue Eggs. Thanks to Ann Nyberg, Eric D. Lehman, Leslie Browning, and Andy Long, Jim Lampos and Michaelle Pearson, John and Denise Surowiecki, Jose Cabrera and Michael Doran. 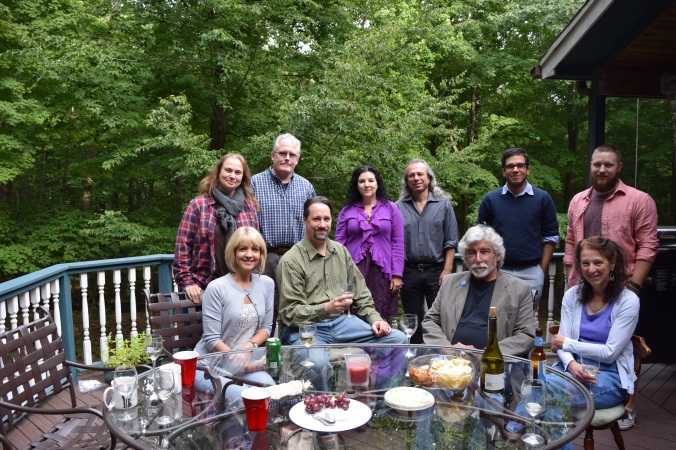 A Great Deal of Company
~from Walden, by Henry David Thoreau
After the storm, the loneliness
does not evaporate. A half-day trek
to the shingled cottage through dunes
ripe with coyote tracks and unfriendly
dwarf pines means another week in isolation
with only the oily pigment of August
and the acrid stink of turpentine
to argue with. Even when the sun
in its naked, unforgiving callousness
ventures out again, holes in the atmosphere
remain. It could be worse.

A fourth trapped mouse rumors
to be still alive behind the shack,
and the ghosts of bums and poets ricochet
around the creaky loft. These, anyway, are voices,
consolation for the blank canvas in front of her.
A still life of bowled fruit decays in the charcoal
of her mind. First the brush must dip itself
into the clear water where the muses bathe,
but the well coughs up only the red iron of earth.

Once the mottled conglomerates
of sunset arrive, dinner is made; the wood stove
sparks against a damp log, the unswept floor
calls for a broom, and the burden of idleness
finally exhausts her. She dunks dry bristles
into wet, sandy paint, spreads black onto white
and forges a scene: stick figures walking
in the terrestrial moonscape of dune summer.
A blue crescent of water loops off
the feathered page, blurs past beach grass
to the deep, ample surf, its shores crowded
with the blinking eyes of sea gazers, each
with gravity ’s sadness salted to one brush tip.